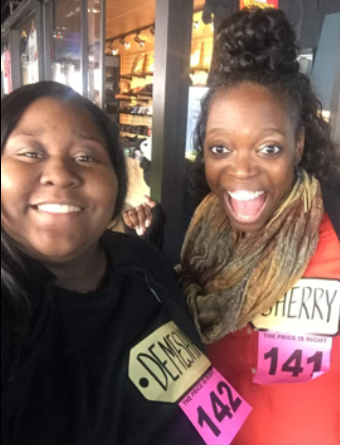 Did I really have the opportunity to travel to Los Angeles, California and attend The Price Is Right TV show Recording? Uh, Yes I did.

Did my friend win some things on The Price is Right? Uh, Yes she did.

Seriously though it is still so surreal that my friend and I visited LA and was on the show called “The Price is Right“.

So here’s the story: Last minute my friend called me on a Sunday night (like literally the night before) and asked me if I wanted to go to LA with her because she has tickets to The Price is Right. Well I just happened to have Monday off so I was like, “Sure let’s go”.  We traveled to LA non rev style.

A couple of events that almost prevented us from going to LA and getting into the CBS station:

A couple of the staff members interviewed us in a group and my friend did really well. When we entered the CBS studio and the recording, the show begins and we hear Demeshia *** come on down? WHAT?!

She won what she bided on (patio furniture) by biding $1 over the other contestant haha, 4,000 dollars, and the show case which was A FREAKING CAR! Whhaaaaaaaaaaaaaaatt? Lol yes a CAR! AND a trip to Africa for 2! I know right? I was so hype like I won everything lol. You can watch the entire show, I provided the link to a you tube recording at the end of this blog. This was a great experience and I recommend that you travel to a game show recording once in your life, who knows YOU might get called down.

Below are my friend Nemo aka Demeshia’s answers to some questions she received:

FAQ:
Q1: Why didn’t you try for the car during the game?
A: I was going to but I felt (God) telling me “No”… I guess then I would have to come up with about $6000 in taxes before I would even get anything!

Q2: How did you get tickets?
A: I went to the website (web link below) and printed them out! Yes it was free! (transportation to CBS is not included) click here

Q3: How long did the whole process take?
A: About 6 hours from the interview process to filling out paperwork

Q5: Can you borrow money?
A: nope, they only cut me a check for the rest of the $4000 after all the taxes were paid

Q6: Why didn’t I give the lady a hug after I won the showcase?
A: I didn’t know she wanted one!

Q7: What’s next now that you’re a Celebrity?
A: a) I’m not a celebrity
b) I think I want to be a Power Ranger!

Q8: What are you going to do with the car and when are you taking the trip?
A: Trip- sometime later this year! The car! Add it to my collection I guess!